Posted by Teresa Heilevang on Nov 3rd, 2013 and filed under Articles / Blogs, Featured. You can follow any responses to this entry through the RSS 2.0. You can leave a response or trackback to this entry 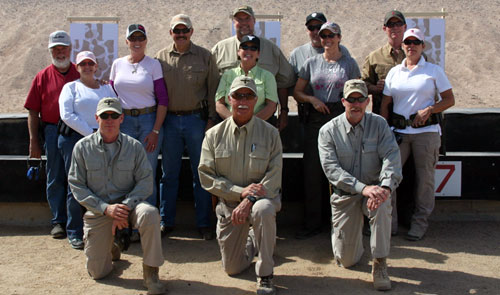 The five couples took shooting, moving and COMMUNICATING to a new level with the help of the skilled instructions at the Gunsite Academy.

Marshal Halloway and I just returned from Gunsite Academy in  Paulden Arizona where we took a Team Tactics For Two class or as I called it… a Couples Class. Yes .. That’s right!  I did say a “Couples” class ~ Which means husband and wife together. Which consisted of: Getting along… Shooting…… Real guns…. Real ammo ( I know, I know — frightening thought).

Now, I have taken some classes at Gunsite in the past but it was all women. No men and certainly no husbands next to you , yapping and getting their two cents in and telling you what you should do, what you shouldn’t do, do it this way, do it that way… yada yada yada … and just generally being what husbands normally can be —- irritating and annoying ((( Bless their hearts))). So when Marshal first mentioned this to me and explained a little bit what it was about… and then added “They would like us to come and take it”, I gave him the deer in the headlight look and I said: “They DO know my personality right?? Do they understand that where you’re concerned,  I have the patience of a rattlesnake??  Do they also realize they have a percentage rate of one of us not coming out alive? ….. Probably you??”

And as usual he laughed and said “Yes they know that – Let’s do it”! So we did!

Understand that I have carried a firearm, hunted deer, birds, and small game for most of my adult life. And since marrying Marshal over 9 years ago I have become a competitive shooter in SASS (cowboy action shooting) and in sporting clays. I’m not a spring chicken so I feel pretty confident when I have a firearm in my hands. And being the small-town redneck country girl that I am,  and live in a Mayberry type of town of 800 people …. I have always had a mindset that what ever situation came before me I pretty much thought I knew what I would do! No problem!! I had it covered!!!

The continuation of the tactical series at Gunsite, BRAVE 2 dives even deeper into the nuts and bolts of armed problem-solving. We started with a one-day spin-up on the square range before moving on to extended techniques for street, vehicle, and home defense. Old favorites like the Mary Catherine drill were re-introduced but with the END_OF_DOCUMENT_TOKEN_TO_BE_REPLACED